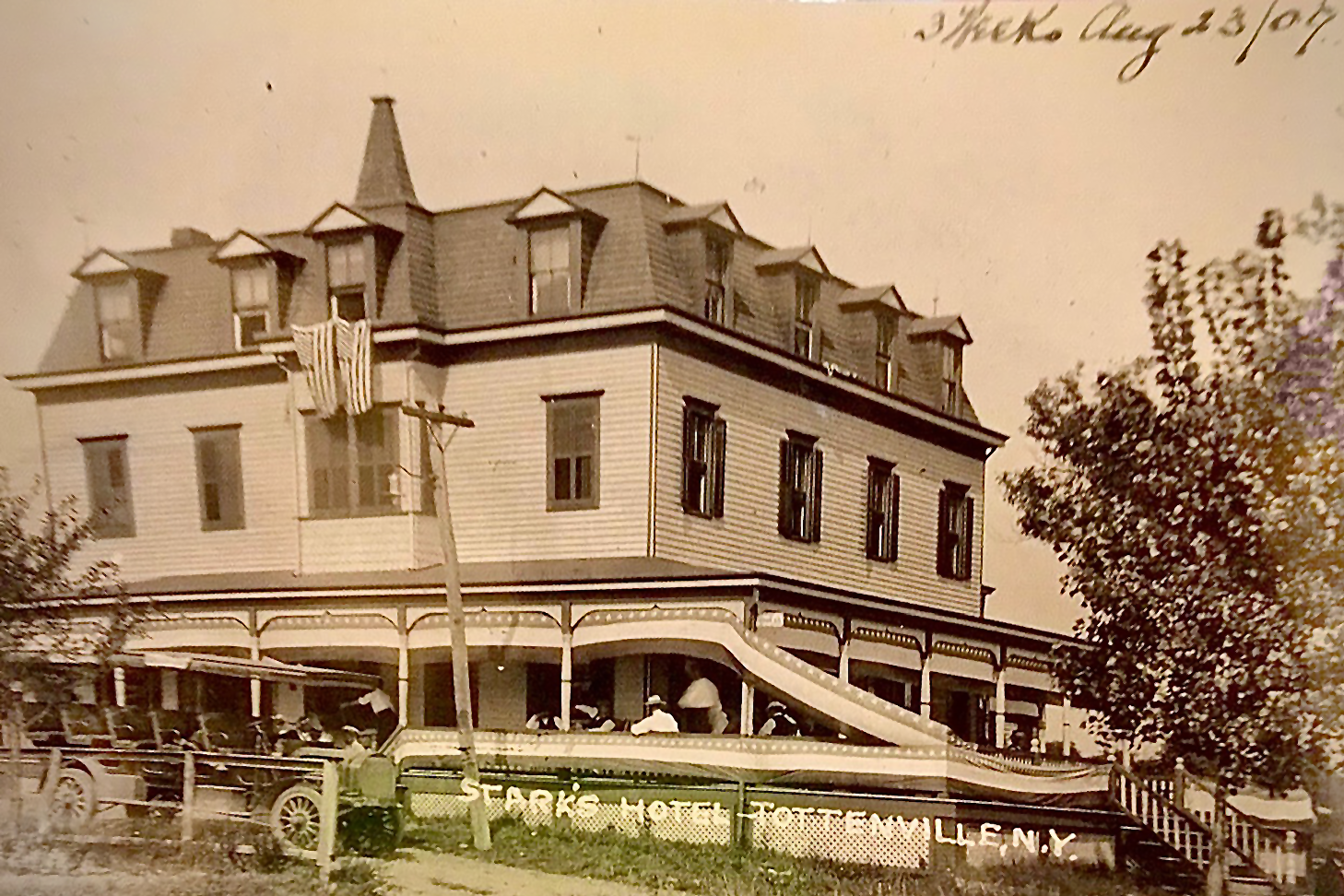 During the 19th century, several structures were built near the shoreline on both the east and west sides of Page Ave. on property formerly owned by the Dubois family.  This early family settled on Staten Island in the 17th century, and, beginning in the early 1800s, lived and worked here.  Richard Dubois (1761-1839) was “engaged in agriculture.”   In later years, his offspring were oystermen and boatmen. Raritan Bay supported a lucrative fishing and shellfish industry during the 19th and early 20th centuries. For more than two centuries, a cluster of houses dotted the shoreline near Page Ave. where, in future years, large groups of children enjoyed the great outdoors.  Residents and visitors enjoyed fishing, pleasure boating, sunbathing, swimming, picnics and clambakes.

In 1903, Charles and Jennie Stark of Brooklyn purchased a seven-acre tract of waterfront property on the east side of Page Ave. that included two houses and several outbuildings. A one-and-a-half story structure became the Stark residence, known as Stark Cottage. The larger three-story dwelling was converted into the Raritan Bay Hotel, also known as Stark’s Hotel.  For more than 15 years, the hotel accommodated guests from Manhattan, Brooklyn and New Jersey, some staying all summer. The Richmond Valley station of the Staten Island Railroad, just a mile away, afforded convenient access for travelers. Hundreds attended the annual pig roasts and clambakes. By 1920, the couple had retired and in 1921 sold the property to a Catholic organization of Bayonne, NJ.

Originally opened as St. Mary’s Cadet Corps camp in 1921, St. Mary’s Parish of Bayonne, NJ ran a summer youth camp for the children of Bayonne and surrounding cities to give them “the opportunity to leave the confines of the city in the heat of the summer to enjoy the then rural atmosphere of Staten Island.”  Kids enjoyed swimming, boating and many other outdoor activities. Large barracks and bathhouses were built. A house on an adjoining parcel, also purchased by the parish, was utilized as a convent. The camp closed in the 1930s, a direct result of the Depression. The parcels are now part of Conference House Park.

Dr. Ottocar E. Kopetschny (1821-1890), a Jersey City, NJ physician, built this house ca. 1884 as a summer residence. Born in Bohemia and educated at the University of Vienna, he took part in the unsuccessful revolutions in the Austrian Empire during  and was forced to flee the country. Dr. Kopetschny was a master of seven languages, a fine musician and composer, and a member of the Stuttgart Literary Society. Dr. Kopetschny died in 1890, but his family retained ownership of the house and continued to enjoy summers here for more than 70 years. The house, owned by the City of New York, sustained extensive damage during Hurricane Sandy, including the loss of its wrap-around porch.