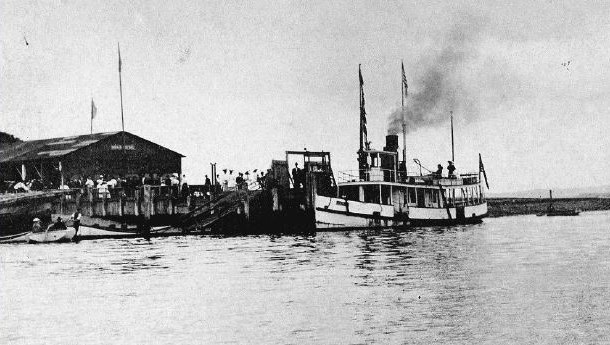 Ward’s Point is located on the southwestern tip of Staten Island. A post marks the “South Pole,” the southernmost point in New York City and New York State.  In 1781, Samuel Ward purchased the stone manor house known today as the Conference House and 373 acres from Christopher Billopp. It would later belong to Samuel’s son, Caleb. Despite the Ward family’s departure from Staten Island in the 1830s, the area retained the name “Ward’s Point” for more 100 years. With easy access to Raritan Bay and the waterways leading to New York Harbor and central New Jersey, Ward’s Point and vicinity was developed for both commercial and recreational use, from shipyards to summer resorts.

In the 1910s and 1920s, the open space and beach attracted children’s summer camp groups, vacationing families, canoeists, and even aviators. By 1935, severe erosion had greatly changed the geological features of Ward’s Point, but the area continued to be used as a local bathing beach and picnic grounds for young adults and families. It was referred to locally as “The Point.”

In 1954, a reporter for The Brooklyn Daily Eagle, Leslie Hanscom, wrote about his journey from Manhattan to the “most distant point within the city limits.”  He determined that point was Ward’s Point, Tottenville. He wrote, “Ward’s Point, for your cartographical information, is the southern tip of Staten Island. It is accessible by the following modes of transportation: subway, ferry, railroad, bus, foot. I don’t mean you have a choice; I mean you have to use all of them.”

James Butler and James W. Sleight operated a shipbuilding and repair yard at Ward’s Point beginning around 1855. In 1863, James sold his half interest to his brother David “D.C.” Butler.  The D.C. Butler Shipyard operated until the end of the 19th century. D.C. Butler was a prominent citizen of Tottenville, having served as president of the Village of Tottenville, as well as local preacher and superintendent of the Sunday School at St. Paul’s Methodist Episcopal Church.  Butler sold the property in 1900.

In 1935, Mrs. Eleanor Brown of Tottenville wrote, “After his [D.C. Butler’s] house fell and the bulkhead crumbled from neglect, the currents of water on the bend [Point] shifted the land so that much of his property is under water.  Where the Red Beacon stands [Great Beds Lighthouse, now white], two hundred feet out, David Butler rode his horse on dry land about 75 years ago.”

A sand redoubt, a temporary fortification made on sand and reinforced with concrete blocks, was built in 1898 during the Spanish-American War. Local lore suggests it was named Fort Lucas. The redoubt was built to guard the channel leading into the Staten Island Sound and prevent hostile vessels from reaching New York Harbor via the Arthur Kill waterway.  It contained a battery of mounted large-caliber, rapid-fire guns. It is unclear if the redoubt was actually manned during the short-lived conflict. By 1930, the concrete foundation was submerged and no longer visible.

In 1902, the Middlesex and Somerset Traction Co. of New Jersey purchased the property on Ward's Point and established the Sea Breeze Amusement Park. A 1903 newspaper advertisement boasted “Sea Breeze, Now Open, The Finest Summer Resort on the Coast,” with new amenities including a shooting gallery, restaurant, bathhouses, ice cream parlor, and swings.  Free dancing with live music was available in the afternoons and evenings.  A long dock accommodated steamboats from South Amboy and Perth Amboy, as well as Manhattan (pictured). The summer resort was short-lived. It attracted rowdy crowds from Manhattan and elsewhere, causing the owner to lose his license in 1904 and forcing the park to shut down.

Several unsuccessful attempts were made in the years ahead to revive Sea Breeze Park. In 1905, new ownership announced plans to operate a temperance resort. Later that year, the owners of Luna Park at Coney Island announced plans to expand the park with added amusement rides. Although these business ventures did not develop, the area continued to be used as picnic grounds. Then, in 1909, a fire, believed to be of incendiary origin, destroyed the buildings. The property remained vacant for years, although it continued to be known by the name Sea Breeze.

In 1910, a newspaper article titled, “Aeroplane on Staten Island Flies at Last,” reported that Didier Masson, “world’s greatest aviator of Paris,” successfully lifted his plane 25 feet for a distance of about 400 feet at Sea Breeze. He, along with other flying men and their machines, utilized the open space for test flights.  In 1912, an aviation company announced plans to establish a business at Sea Breeze to give flying exhibitions of airplanes and hydroplanes, teach flying, and give airplane rides. For reasons unknown, the business opened instead across Raritan Bay in Old Bridge, NJ.

According to newspaper accounts, a proposal for new ferry service between South Amboy, NJ and Tottenville was discussed as early as 1896.  It wasn’t until 1922, however, that formal plans were underway. In January 1922, the City of New York issued a franchise to the Jersey Coast Ferry Company for the new service that was expected to relieve the congestion and delays on the Tottenville-Perth Amboy ferry line. The City had acquired a site near Ward’s Point, and soon began construction of the dock and terminal.  In 1924, the Port Authority of New York announced plans to build the a bridge [Outerbridge Crossing] across the Arthur Kill waterway and the project ended. The terminal was dismantled, and construction of new roads leading to the ferry site was halted.

To Site #5: Walk to the beach, turn right at the shoreline and continue until you reach a Heritage Trail marker pointing to the path leading into the park. Stop. Look north at the shoreline to see several pilings from the proposed South Amboy ferry. Then follow the path into the park and connect with the Park's Blue Trail to Site #5.